She was a farmworker. Her grandson is a Lyft driver. A fight for workers’ rights unites them

She was a farmworker. Her grandson is a Lyft driver. A fight for workers’ rights unites them

More than 40 years ago, Maria Cardona laid her livelihood on the line to demand change in the hot central California fields where she picked grapes and other produce for $1.75 per hour.

Cardona, now 80 years old, was tired of how farmworkers like her were treated – the low wages, the backbreaking labor, the days without access to cold water or bathrooms. Most of all, she was tired of the disrespect from her bosses, who she said would regularly shout at workers in the field.

“It’s never easy – it’s very difficult when there is no milk in the house and you have six children to feed,” she said. “But if you don’t fight for your rights, nobody is going to do it for you.”

In the 1960s, Cardona began organizing with her fellow farmworkers, despite threats and intimidation from management. She participated in the Delano grape strike, a five-year fight for better conditions for grape pickers that received national attention and resulted in a collective bargaining victory that benefited more than 10,000 farm workers.

Maria Cardona, around the time she began organizing with the United Farm Workers. Photograph: Courtesy of Carlos Ramos

Soon after, corporate growers funded a ballot measure called Proposition 22 to block similar action and keep workers from organizing in the future. The 1972 proposition was well funded by a coalition of growers and would effectively “destroy” efforts to build a farmworkers union, said the labor activist Cesar Chavez, who mobilized a response.

Proposition 22 ultimately failed after an intense and public fight. But decades later, in a remarkable twist of fate, Cardona’s grandson, Carlos Ramos, is fighting his own battle against another Proposition 22. This one, too, is backed by a powerful corporations – including Uber, Lyft and Instacart – and would limit workers’ power to unionize. And while Ramos’s job as a Lyft driver may seem far removed from picking grapes, the struggle of today’s gig workers in many ways echoes that of the farm workers in the 1960s and 70s.

In 2019, California’s gig workers scored a major victory with the passage of AB5, a bill that forced companies to reclassify their workers as employees, ultimately giving them many benefits they had previously been denied, including healthcare and paid time off.

The modern Proposition 22, which will appear on the ballot this November, was written by tech giants including Uber, Lyft, Instacart, and Doordash, as a way shirk the new requirements of AB5. Ramos, who is also an organizer with the labor group Gig Workers Rising, says the measure would allow these companies “to continue to exploit us”.

“These businesses are trying to carve out rules that only apply to themselves so they can get around having to pay workers a fair wage,” he said. “It is a classic case of the little guy trying to take on big business.” 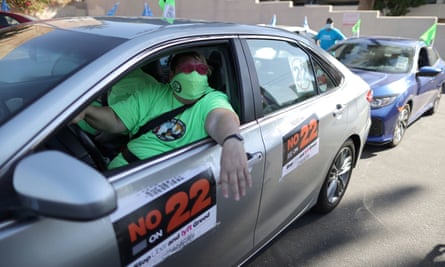 ‘It’s a David and Goliath fight’

The similarities between the two propositions go deeper than the shared name, said Miriam Pawel, an independent historian who has spent a decade studying and writing about California farmworkers and labor movements.

“What gig workers are facing today is very reminiscent of the struggles we saw farmworkers facing,” Pawel said. “It is a David and Goliath fight, where there is an effort by big industry to circumvent initiatives that would give workers more protections and allow them to organize.”

Farmworkers have historically been exempt from labor protections, beginning with the National Labor Relations Act (NLRA) in 1936, a foundational labor law in the US that established basic rights of employees to organize to improve working conditions. The exclusion of field laborers from the act was done “to preserve the quasi-plantation style of agriculture that pervaded the still-segregated Jim Crow South”, according to a 2011 paper on the origins of the modern agriculture industry by Juan F Perea, a law professor at Loyola University Chicago. 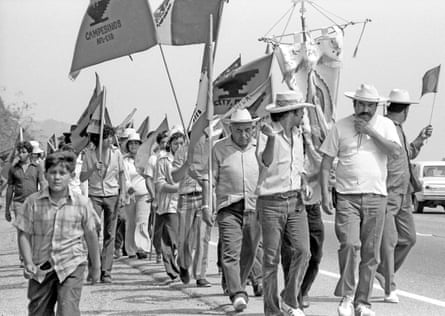 Similarly, the gig economy is run on the principle that workers are independent contractors, not employees, and thus also lack protection under the NLRA. Ramos has driven more than 10,000 rides for Lyft without gaining employee status. He quit in early 2020 because of the pandemic. He said since he began driving in 2017, he has watched the wages, bonuses, and other incentives get lower and lower.

AB5, which was passed in 2019 and took effect on 1 January 2020, would change that, using a three-part standard to determine whether an employee is properly classified as an independent contractor. Uber and Lyft have claimed their drivers do not fit that standard, but California legislators disagree. A San Francisco judge issued an injunction in August forcing the companies to comply with the law and re-classify their drivers. 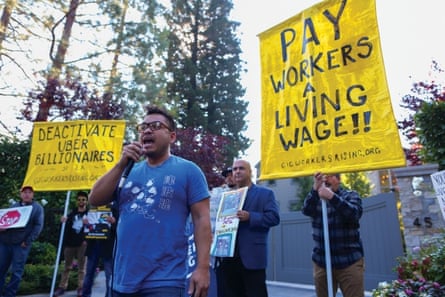 Proposition 22, which would allow companies to continue to classify gig workers as contractors, is heavily funded by Uber, Lyft, Doordash and Instacart, which have together amassed a war chest of $180m. The campaign has spent $126,000 in advertising on Facebook alone and has been repeatedly flooding users with Prop 22 promotions. For instance, Uber users in California have had to “confirm” they have read a push notification promoting the proposition before hailing a ride. Lyft has sent notifications to riders as well.

Ramos said the fight for better wages had only intensified with the onset of the coronavirus pandemic, which underscores the precarity of life in the gig economy.

“With so many people being out of a job, when we start to get back to some kind of normalcy people are going to be desperate for work,” he said. “In these times, we need to make sure there are protections in place so employers are not taking advantage of that.”

‘This fight for rights – it never goes away’

Uber and Lyft claim Proposition 22 provides protections and benefits to drivers, while allowing them to remain part-time workers. Workers like Ramos disagree, and he compared their lobbying tactics to the farmers of the 1970s. He said the fight was part of his legacy as a Mexican American immigrant. 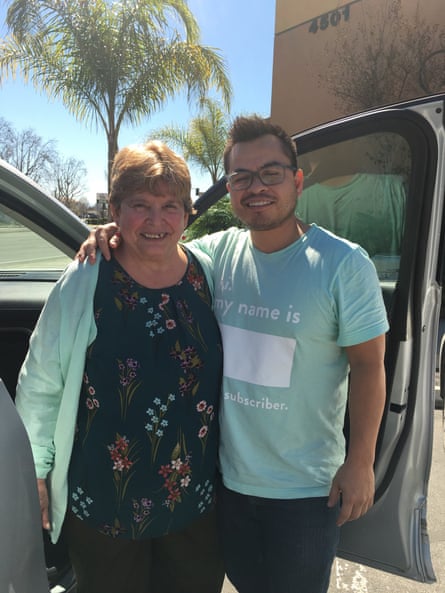 “People ask me, ‘Isn’t that discouraging, knowing that your family has been fighting the same fight for decades?’” Ramos said. “For me it is not discouraging – it is promising, because they won their fight. There was real change in the farming community.”

More Cab4Now News:-  Lyft sets itself up to be one of first large tech flotations of 2019

Pawel said another similarity between the two movements was how they leveraged workers appealing directly to the public, and made the workers who are central to the movement more visible. These tactics could be particularly effective, said Pawel.

“The way they organized against the first Proposition 22 was very cutting-edge – the idea of farm workers coming out and saying ‘I am a farm worker, this is what my life is like,’” she said. “It was about humanizing them.”

The response to the corporate push of the modern Proposition 22 has been similarly worker-centered. Tens of thousands of workers are mobilizing grassroots efforts against the bill. They stand outside Uber’s offices demanding rights, they share their stories on social media, they ask customers not to cross the digital picket line during strikes.

“This fight for laborers, this fight for rights – it never goes away,” Ramos said. “There will always be people trying to exploit other people. There will always be people who are powerful, and people who are not. But this should motivate you, because people without resources are putting blood, sweat and tears into this – because we know we can win.”